I’ve been bleeding Dodger Blue for longer than I can remember. One of my earliest memories was jumping on the couch with my Dad, way past my bedtime in my Dodger jammies after Dem Bums won the World Series in ’88. I’ve experienced immeasurable joy, and gutting pain. It’s all part of sports, and truly loving a team. I never really had a choice in the matter. I grew up going to games with my Dad, and my Grandma. My Gram would sit in the stands with her radio headphones on so she could listen to Vin and watch the game happen in front of her. We’re three generations of bonkers fans. I met Shawn Green and couldn’t talk, I stumbled over my words like a pre-teen girl and I’m not a person who gets flustered. Ever. Steve Sax called me to congratulate my husband and I on our engagement, long story for another day 😉 The Los Angeles Dodgers have been a constant in my life since before my life began, if that makes sense.

I live in Las Vegas. I grew up in a small town about 30 minutes east of here, and until 2017, we have never had a professional team of our own. That changed inOctober of 2017 when we got a brand new NHL franchise, the Vegas Golden Knights. This being a Dodger blog, I’ll refrain from any VGK talk. But, The Bulldog himself, Mr. Orel Hershiser, lives here. He’s called Las vegas home for a long time, and it’s not a big deal to see him at hockey games. I’ve seen him once, but the most I could get out was “OH MY GOD THAT’S OREL HERSHISER” in a very loud stage whisper to my fella. I wasn’t gong to chase the guy down just to get a selfie and stumble over my words again.

New Year’s Day 2018, we were at the VGK game, they were playing the Kings. The game was just about to start when I look up and see one Kourtney Turner making her way down the stairs, and who was behind her??? JT, Ginger Jesus, Justin freaking Turner. My track record for these kinds of interactions is not so great. I get all goofy around athletes that I respect. I was once again stage whispering to my better half “THAT”S JUSTIN TURNER! DID YA SEE DID YA SEE???” I desperately wanted t0 go say hello, but I had no idea how to do so without drawing attention to them. At intermission, my guy walked me over and we sat down and had the nicest chat with Mr. & Mrs. Turner. I blathered on about my love for the team, my respect for his game in particular, I showed him my Dodger tattoo, told him about my Dad and how Dodger baseball has always been something special that my Pop and I share. It was a moment in my life that I will never ever forget. I waited until the game was over to post the picture, because I didn’t want them swarmed, but as far as moments go . . . That one was definitely in the top 5 in my life. 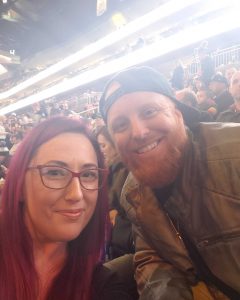 Hey all, It’s Ash. (tongue in cheek) With the Dodgers being as dominant as they are right now, starting their cruise into what pretty much…

“If you ain’t cheatin, you ain’t tryin” is something we’ve all heard. Some of of us have even uttered it ourselves. The Houston Astros from…

In 2017, the Atlanta Braves were caught illegally channeling funds to international players so they could keep the appearance of staying under the MLB international…